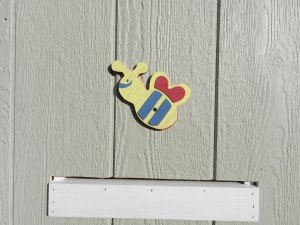 The Alternative Honey Bee Nutrition– Beyond Sugar Syrup study presents an alternative method of feeding honeybees with syrup that is enriched with a high quality infusion of honey/nectar plant material chosen for its attributes as a natural miticide and medicinal benefits to the immune health of the honeybee.

The general practice of feeding honeybees syrup made of refined sugar, HFCS or other artificial solutions, while highly economical in dearth periods of the year, fails to provide honeybees with the broad range of nutrients which they might find in natural forage. This study is taking place at Linden Hill Farm and Apiary, Towaco, New Jersey.

ALTERNATIVE HONEY BEE NUTRITION: THE STUDY
Twelve honeybee colonies are set up, fed different ways according to traditional and an alternative method, monitored and following processing by the honeybee, laboratory testing for quality of the honey product. Upon completion of the study, a short course on beekeeping will be offered to educate beekeepers and promote an effective nutritional alternative to a common practice that might be detrimental to honeybee health.

THE PROBLEM AND WHY THIS IS SO IMPORTANT
The general practice of feeding honeybees syrup made of refined sugar cane, beet sugar, HFCS or other artificial solutions, while highly economical in dearth periods of the year, fails to provide honeybees with the broad range of nutrients they might find in natural forage. This method of manipulating the honeybee diet is widely taught to novice beekeepers and practiced in the United States.

Michurin Biology and Pavlov Physiology prove that “feeding is a kind of mentor and the quality of the food is the factor that influences the formation and growth of the bee” (Curative Properties of Bees and Bee Venom, Naum Yoirish, Moscow, 1959, p. 117.) A poor diet of empty calories could lead to weaker health in honeybees and contribute to the appearance of various opportunistic conditions, such as Varroa mite infestations, “CCD” and/or a range of other diseases that afflict the hive affecting both commercial and small scale beekeepers nationwide.

The sick honeybee appears to be an indicator species that depicts the interruption of the essential practice of sustainable agriculture: pollination. When honeybees feed on sugar syrup, the resulting substandard honey may measure greater than 8% sucrose permitted by the U.S. Pure Food Law (Health Benefit of Honey, www.honey-health.com/honey-6.shtml).

The colony uses this honey to feed its queen, brood and entire population of workers. On the other hand, a hive processing nectar from natural honey plant sources produces a honey of presumed better quality and different sugar composition.

I believe in a science that regenerates and restores the environment rather than diminishes it. As beekeepers, we do what we are taught by our mentors. In this case, it is a seemingly simple concept, yet one that would disrupt the system of feeding sugar, which the caretakers of the honeybees have so readily adopted.

I propose this experiment to test a potential supplement that may improve the present method of feeding and as a proactive step to stimulate the immune system of the honeybee to help fight off pathogens.

EFFORTS MADE BY OTHERS TO SOLVE THE PROBLEM 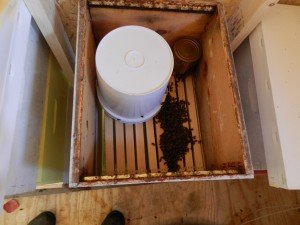 There have been some attempts that address the challenges for improving the nutritional quality of supplemental artificial feeding of honeybees to ward off starvation, strengthen immunity and combat diseases. One supplement known as Honey B Healthy contains a stimulant and essential oils, neither of which is for human consumption, yet beekeepers feed it to honeybees.

The principals of the “Express (Accelerated) Method” where honeybees are fed sugar syrup enriched with various nutritious supplements successfully has been described in Europe. (Bees and People, Mir Publishers, Moscow, 1974, p.75).

Review of SARE projects dating back to 2005 revealed research that utilizes thymol and mineral oil as a new method to control Varroa– Food Grade Mineral Oil and Thymol Fog Application as a Natural Alternative to Treating Honeybee Mites by Heather Kyser (2008).

A USDA Agricultural Research Service study– Immune Pathways and Defense Mechanisms in the Honey bee by Jay Evans (2006) describes enhancement of natural defenses through breeding genomes of honey bee health. The work that most impressed me is from the Carl Hayden Research Center’s (USDA Honey Bee Research Center in Tucson, Arizona) whose Mission Statement is “to focus on improving honey bee nutrition for healthier colonies and developing novel control strategies for Varroa using essential oils, pheromones and nutrition.”

It is the research on nutrition which is somewhat lacking in the Northeast and I propose to contribute vital information by testing the hypothesis that nutritional supplements in sugar, sugar syrup will have a positive impact on honey bee health. 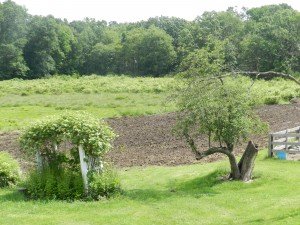 Annually, the 60X60 field is sown with buckwheat and plant annuals such as sunflower for pollen source. Perennials such as echinacea, Bee Balm, Jerusalem artichoke and mints all thrive on this property and are encouraged for their medicinal value and pollen source.

The size of the property and the diversity of the meadow and woodland, pond area and pasture appears to be the optimal environment in which to observe and test this hypothesis. As a small scale tree farmer specializing in Tilia species (aka Basswood, Linden, Lime) there are over 50 trees planted on the property.

This study intends to test quantitatively that linden infusion specifically will improve both the health of the honeybee and the quality of the honey product.

Three to four foot seedlings are available for purchase to beekeepers as a valuable mid summer nectar source. 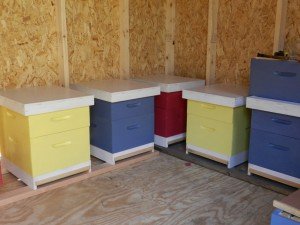 The study includes procedures of baseline sampling of 12 colonies of honeybees purchased as 3lb. packages from a reputable apiary. All treatments on packages will be recorded.

A sample of 50 bees collected in alcohol from each of the 12 hives will be sent to the USDA Agricultural Research Service in Bethesda, Maryland to provide a baseline of Varroa, Nosema and trachial mites. During the course of this two year study, samples will be provided periodically (to the USDA) to monitor infestations. Sticky boards will be used for a five day period (once a month) on location.

The 12 colonies are labeled “A-L” with the control hives randomly placed. The counting of mites by an unbiased individual (Technical Advisor, Dr. N. Ostiguy of Penn State University agreed to perform this) will present a double blind study.

HIVES
Each hive consists of (1) 9 frame deep for brood rearing and (1) 9 frame medium will be used for surplus. Foundation will be plastic coated with beeswax (Duragilt). Each hive contains 1 frame of drawn wax comb to allow the queen to begin laying right after installation. 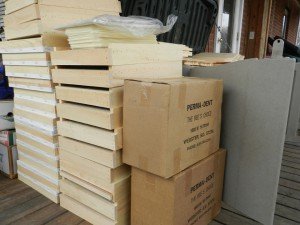 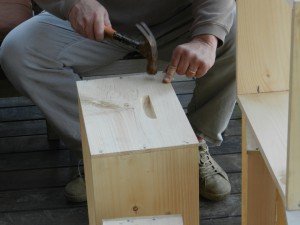 BEE HIVE LOCATIONS
Twelve hives will be placed at each location. To eliminate variables of location effect, which may alter results, the data will be analyzed using a “Randomized Complete Block” design. A “Complete Random” design will be used to analyze for location effect.

In one location, the hives will be in an easterly facing barn/shed, an enclosed structure to protect them from winter freezing as an overwintering hazard and access to the inside of the hives will be available all year round. This design would protect the bees from predators such as bears without the need for electric fencing. 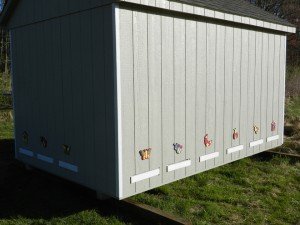 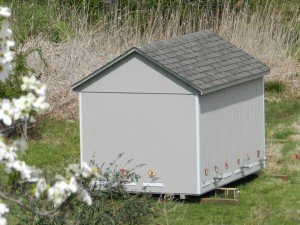 The hives in the second location will be protected from bears using electric fencing. These hives will be managed during the foraging season and prepared for winter in a manner typical for the regs

INSTALLATION/TEST GROUPS
Packages will be installed between March 15 and April 1 (weather permitting and when sufficient nectar/pollen forage is available). The queen will be released after the third day.

TEST GROUP 1- Four colonies will be fed with 2 gallon feeder pails placed directly onto frames. The proposed feed will be 2:1 sugar syrup made with sucrose (cane sugar) combined with prepared concentrated infusion of linden flowers and leaves (Tilia sp.)

TEST GROUP 2- Four colonies will be fed only 2:1 sugar syrup

TEST GROUP 3- Four colonies will not be fed.

Linden flowers and leaves (Tilia cordata sp.) is the specific medicinal/nectar plant from which the infusion will be made. It contains Farnesol, a volatile oil which gives Linden flowers its characteristic smell. It is also an antibacterial and natural pesticide against mites. It contains flavonoid glycocides including hesperidin and quercitin, saponins, condensed tannins, mucilage, manganese salts. Abundant flavonoids such as astragalin, isoquercitin, kempferitin, quercitin, tiliroside, hydroxycoumarins also exist in linden. (PDR from Herbal Medicine, Fourth Edition). The concentrated infusion will be two teabags/pint or 16 teabags per gallon of sugar syrup.

HARVESTING HONEY
Honey will be harvested twice a year per hive leaving at least 70 lbs. (approximately eight full frames) per hive to “over winter”. This will be guaranteed by way of feeding if necessary.

A sample of the honey will be sent to an independent laboratory for quantitative and qualitative analysis testing for: 1) Sugar Profile: glucose, D-fructose, L-fructose, galactose and sucrose. 2) Hydroxymethylfurfural (HMF) and 3) Isotope Ratio Testing methods would be used to test for purity.