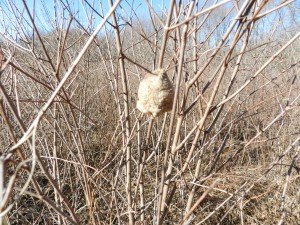 A praying mantis pod on the farm!

I thought of this term this morning as I walked the trail around the farm. Its because I cannot stop myself from searching for more Praying Mantis Pods. This year for whatever reason, there are dozens of them all over the property. Loads of egg cases of this alien looking magical insect with its triangular head that seems to tilt intelligently as you gaze upon it. I’ve had at least 2 significant incidents with Praying Mantises. One episode was on the boardwalk at Wildwood Crest in a noisy arcade and a second memorable one while I was mowing one of the fields. I will never forget either instance. Ask me about it and I will tell the story. It sounds better than it reads.

The unusual abundance of these pods all around our fields led me to do the research and here are some interesting facts.

There are 3 species of praying mantids that are common. These are the Carolina (Stagmomantis Carolina), a native species of mantid; the Chinese (Tenodera aridifolia sinensis) which was imported into the U.S. in the 1800’s to control pests of agricultural crops; and the European (Mantis religiosa), another imported mantid. Each mantid species looks slightly different from one another.

Adult mantids that are busy laying eggs in the fall and the egg masses are usually laid on branches or other structures. The egg mass laid by mantids is called an ootheca. It is in the egg stage that mantids spend the cold winter months. In the fall when the female lays her eggs she produces a substance called spumaline in which she deposits her eggs. The egg mass dries and feels like lightweight styrofoam.

Each of the 3 mantid species has a somewhat unique shape to their egg mass and the one prevalent on our farm is that of the Chinese praying mantid. In the spring when it warms up baby mantids emerge from the egg cases and begin their consumption of food. They let down a threadlike lifeline and miniature praying mantids march single file down the thread into the world of predators. Like those baby turtles that have to shimmy across the beach to the ocean because the mom laid them in a nest that was just that far. Another test for survival of the fittest, I guess.

I walked the property with a friend last week and pointed out enthusiastically everytime I saw another pods. It was contagious. Both of us pointed wildly with huge smiles like little kids. She later sent me a symbolic meaning of the praying mantid. It represented “stillness” as Mantids are “sit and wait” predators. I appreciated the definition but was somewhat disappointed by the words since I am so not able to sit still. Maybe, as a result of these incredible creatures I will try to sit still a little more this spring. At least long enough to observe the phenomenon of the birth of these creatures. That would be a good thing.

I started thinking about indicator species and how they predict and effect our environment.

Further searches revealed having praying mantids and praying mantid egg cases on plants in your property is an indication of a healthy ecosystem. Now that made my day.